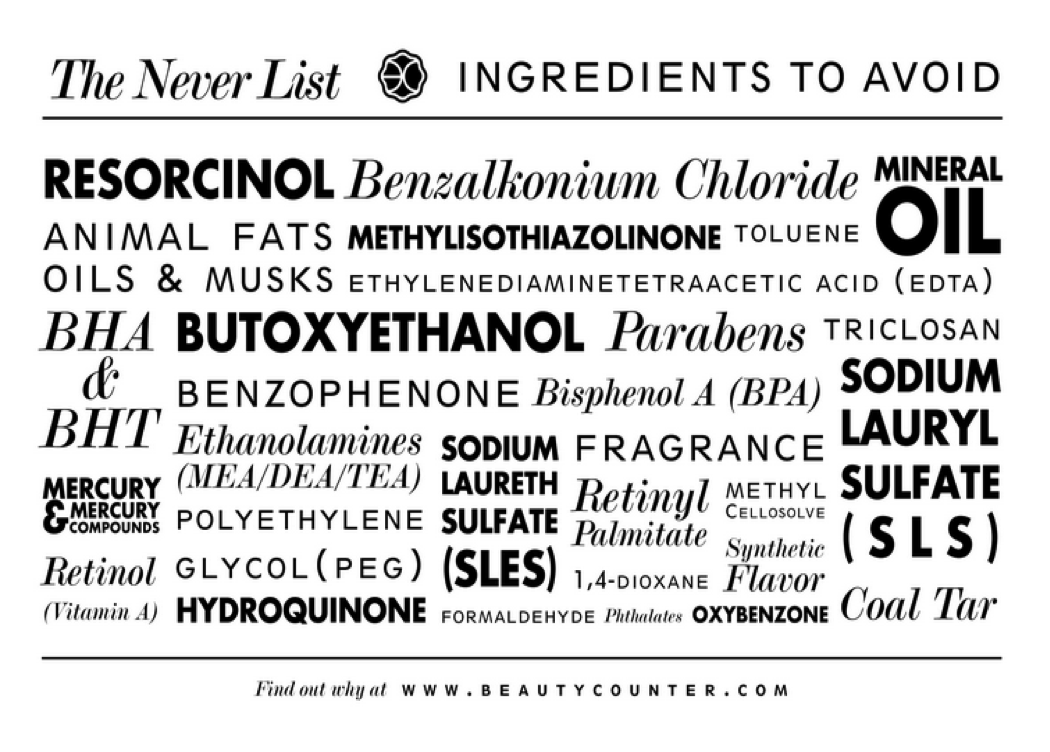 An article by Maia James for The Huffington Post back in 2013 did a great job summarizing the concerns regarding phthalates. Take a look at what products you have in your home that contain phthalates, then visit Kassie’s Beautycounter to find some phthalate free beauty products to help clean up your routine. If you have children, this is an opportunity to end their exposure to these very dangerous endocrine disrupting chemicals, phthalates.

Here is a piece of The Huffington Post article:

For several years now we’ve been hearing about the mysterious, ubiquitous, and hard-to-spell chemical compounds know as phthalates (pronounced f-THAL-lates), which are used to make plastics flexible and as lubricants in cosmetics.

Most of us have the general idea that we should avoid phthalates, but we aren’t certain why, and (more importantly) how.

Where Are Phthalates Used?

You’ve probably heard that phthalates are commonly found plastic food and beverage containers, but it turns out their presence extends far beyond that. In fact, about a billion pounds of phthalates are produced every year, and their use is so widespread that they are nearly impossible to avoid entirely. Indeed, 95 percent of us have detectable levels of phthalates in our urine.

Phthalates are found in our food and water, too. They are in dairy products, possibly from the plastic tubing used to milk cows. They are in meats (some phthalates are attracted to fat, so meats and cheeses have high levels, although it’s not entirely clear how they are getting in to begin with). You’ll find phthalates in tap water that’s been tainted by industrial waste, and in the pesticides sprayed on conventional fruits and vegetables.

What Are the Effects of Phthalates?

As a result of this ubiquity, we are all ingesting, inhaling, and absorbing through our skin a significant phthalate load — which quickly moves to our bloodstream.

So why is this scary?

Well, if you ask the American Chemistry Council, a lobby group for phthalate manufacturers, phthalates are totally safe and “among the most thoroughly studied family of compounds in the world.” But what do some of these studies show?

The effect of phthalates, especially on male reproductive development, has been observed since the 1940s, and phthalates are now widely known to be “endocrine disruptors.” So what does that mean? A Frontline special explained that:

Hormones are chemical messengers that travel throughout the body coordinating complex processes like growth, metabolism, and fertility. They can influence the function of the immune system, and even alter behavior…In response to a signal from the brain, hormones are secreted directly into the blood by the glands that produce and store them. These glands make up what is known as the endocrine system. Chemicals that interfere with the function of hormones are therefore known as endocrine disruptors.

Phthalates are thought to mimic and displace hormones and interrupt their production. This can have a range of unpleasant effects.

• In 2009, a small Taiwanese study on humans showed that phthalates passed from mother to fetus through the placenta affect female babies, sometimes resulting in abnormal sexual development.

• Pregnant women exposed to phthalates in the workplace were found to be two to three times more likely to deliver boys with the reproductive birth defect known as hypospadias.

• A 2007 study found that higher levels of phthalates detected in the urine of adult males was associated with increased waist circumference and insulin resistance.

Finish reading Maia James’ article for The Huffington Post here to learn How to Avoid Phthalates. Be aware of what you use on your body and in your home.

Screen Addictions And Our Children