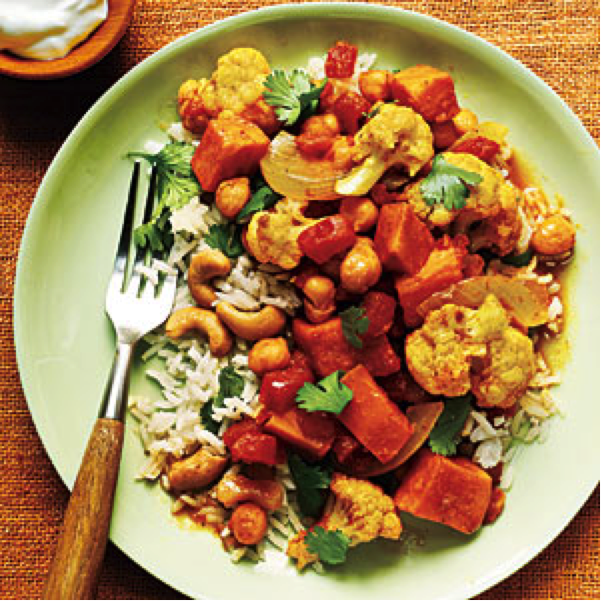 The motto of EcoPharmacist has always been ‘Emphasizing the importance of diet and vital nutrients—the natural disease-preventing “medicines” that people need daily.’  Easy translation for some is to look at it as, food as medicine.

Continuing education is exciting to me. Learning and exploring how we can ensure the food choices we make have a benefit to our bodies, is very empowering. Making educated choices feeds the soul with the same benefits. A recent area of intrigue is to dissect some of our household favorites, and maybe tweak them so that the emphasis of diet and vital nutrients is focused on.  In our house, foods from around the world are enjoyed. Mexican, Italian, Chinese, Japanese, American and Indian foods are just a few examples of the worlds we explore with our senses. Today I want to share a favorite that has been adapted from Cooking Lights August 2010 issue, called Fall Vegetable Curry with Basmati Cashew Rice. I have dissected a few of the nutritional variables in this dish, to give my soul a nod, and acknowledgment that this dish is good for us!

While this recipe has a variety of vital nutrients, I will focus on the curry powder benefits. The garbanzo beans, rice, cilantro, yogurt, onions and cashews all add another level of nutritional benefits, but the flavor boost of curry is also giving your body a great power of goodness.

Here are some reasons I found and repeat directly, through American Grandparents Association and grandparents.com, that make curry good for you:

The University of Texas MD Anderson Cancer Center reviewed studies that looked at the effect of curcumin on cancer. The researchers conclusion? That “it is quite apparent that curcumin has tremendous potential for prevention and therapy of a variety of cancers.” Another UCLA study has found that curcumin can trigger cancer-killing mechanisms found in human saliva. However, to get enough curcumin to achieve this effect, it must be taken in supplement form.

Turmeric has been used for eons as a folk remedy anti-inflammatory, helping with muscle and joint aches. A University of Arizona study confirmed that the curcumin and other essential oils in turmeric can protect against joint deterioration and inflammation due to rheumatoid arthritis. And a study on the effectiveness of ibuprofen over curcumin to ease pain found that surprisingly, the benefits were about the same for both the ibuprofen and the curcumin.

Chinese herbalists have used sweet basil, also found in curry, for centuries to bring down hypertension. A study out of Xinjiang Medical University, China, puts some science behind the folk remedy. Researchers found that basil affects levels of the proteins that constrict blood vessels. In addition, a study by the Indigenous Drug Research Center in India found that cardamom, another curry spice, also had a positive effect on those same proteins.

Turmeric may ward off osteoporosis, according to a different University of Arizona study. Researchers found that when female rats that had had ovaries removed were given curcuminoid-enriched turmeric extract, it prevented up to 50% of bone loss, and also preserved bone structure and connectivity.

Coriander, another curry spice, has been shown to destroy food-borne bacteria, preventing those nasty midnight runs to the bathroom. A study published in the Journal of Medical Microbiology found that a solution made with coriander oil effectively killed several strains of bacteria including E coli.
Now its time to try this wonderful recipe and reap the benefits through body, mind and soul. Know you are eating good and doing your body good! ENJOY!