What is MTHFR and how can it affect your health?

What is MTHFR and how can it affect your health? Well excuse me, that is quite a naughty mouthful, or is it?! Many get the wrong impression from those 5 little letters, when in fact MTHFR, is quite a serious subject. MTHFR is the official name of a gene within your body. This gene is responsible for giving instructions to your body on how to make an enzyme called, methylenetetrahydrofolate reductase. A project in 2003, called the Human Genome Project, exposed MTHFR genetic defects, which do not allow your body processes to work efficiently.

Methylenetetrahydrofolate reductase helps your body process amino acids, the building blocks of protein. Let me try to simplify the process so we can understand it. The MTHFR gene, produces the MTFR enzyme. Through a process called methylation, that enzyme then combines with folate (vitamin B9) to convert a molecule called 5,10-methylenetetrahydrofolate to a molecule called 5-methyltetrahydrofolate. 5-Methyltetrahydrofolate then converts the amino acid homocysteine into another amino acid called methionine. Methionine is used by our liver to break down or process fats, and use antioxidants. Methionine is also used by the body to make SAMe, which is an anti-inflammatory, and helps the brain regulate serotonin and dopamine, thus regulating depression.  Without proper methylation functions, your body is at risk for a build up of toxins, inflammation, and other health problems.

According to stopthethyroidmadness.com, having a defective or mutated MTHFR gene can lead to some serious health complications:

Another known authority on MTHFR defects, is Dr Ben Lynch. He has a site dedicated to answering questions and exploring the treatments of such MTHFR defects. If you visit his website MTHFR.net you can access thousands of article on the subject and find doctors who have experience with MTHFR defects. Dr. Lynch feels that “repairing the digestive system and optimizing the flora should be one of the first steps in correcting methylation deficiency”, and that especially includes treating candida because of the toxins it releases, inhibiting proper methylation. For more information visit his website and the above Stop The Thyroid Madness site as well.

The health benefits of bone broth 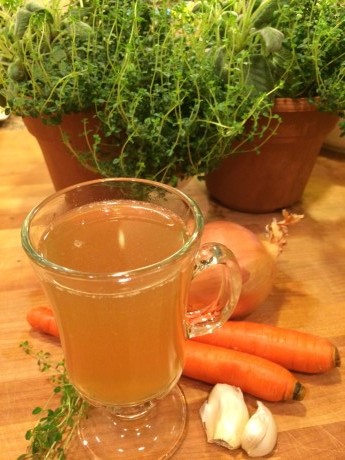 Bone broth is high in calcium, magnesium, and phosphorus, making it a great compliment for healthy teeth and bones. Bone broth also supports joints, hair, skin, and nails due to its high collagen content. In fact, some researchers even suggest that it helps eliminate cellulite as it supports smooth connective tissue. Another benefit is the amino acids released into the broth. Amino acids boost the immune system, reduce inflammation and improve digestion.

The easiest way I have found to make chicken bone broth, is low and slow with a crock pot. Adding vegetables, spices and herbs make an even more delicious broth to be enjoyed 2-3 times a day.

Roughly chop the celery onions & carrots into 1-2 inch pieces. Leave the nutritious peels on the onions, carrots and leafy ends on the celery. Slice the head of garlic in half crosswise, leaving the peels on it as well.

Add all of the ingredients to a 6 quart (or larger) slow cooker. If yours is smaller, it’s easy to half the recipe using 1 chicken carcass instead of 2, and half of the other ingredients. Add enough water so that everything is immersed–approximately 12 cups of water for a full batch.

Cover and cook on low for 12-24 hours. Honestly, the time is very  flexible. I normally make mine after we have eaten roasted chicken for dinner. I then place the carcass and other ingredients into the slow cooker and let it cook overnight. The result the next day is a healthy chicken broth with the most amazing flavor.