Screen Addictions And Our Children 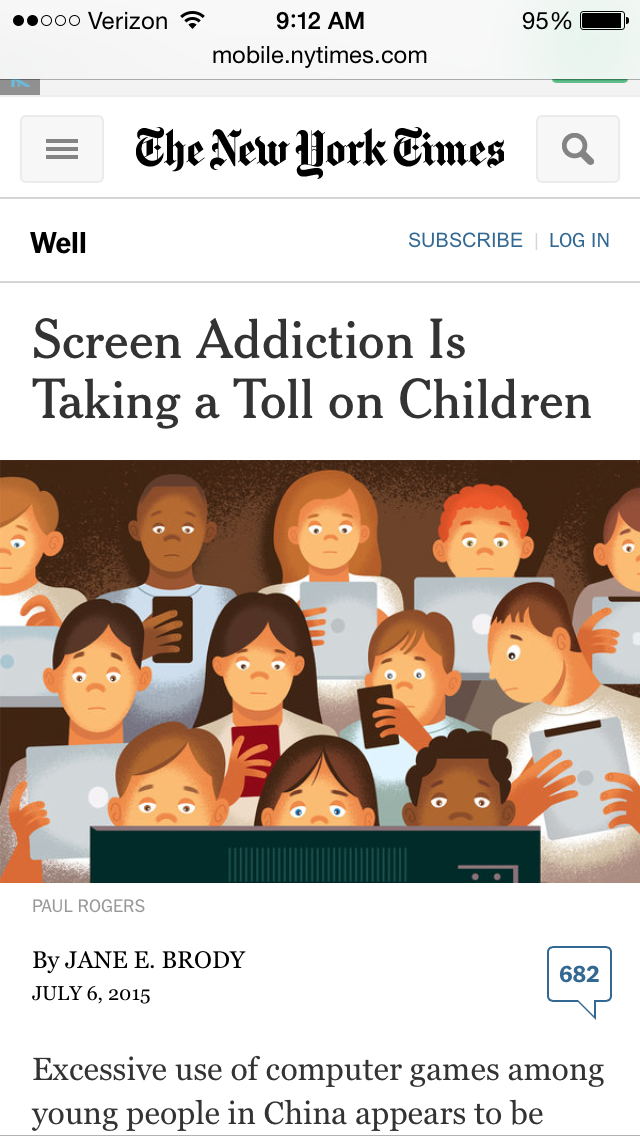 A recent article in The New York Times regarding screen addictions and our children caught some attention. Professionals and parents need to express concern regarding the amount of time children are allowed to spend on phones. TV, computer, iPads, tablets, etc.

According to The New York Times, Excessive use of computer games among young people in China appears to be taking an alarming turn and may have particular relevance for American parents whose children spend many hours a day focused on electronic screens. The documentary “Web Junkie,” to be shown next Monday on PBS, highlights the tragic effects on teenagers who become hooked on video games, playing for dozens of hours at a time often without breaks to eat, sleep or even use the bathroom. Many come to view the real world as fake.

Chinese doctors consider this phenomenon a clinical disorder and have established rehabilitation centers where afflicted youngsters are confined for months of sometimes draconian therapy, completely isolated from all media, the effectiveness of which remains to be demonstrated.

While Internet addiction is not yet considered a clinical diagnosis here, there’s no question that American youths are plugged in and tuned out of “live” action for many more hours of the day than experts consider healthy for normal development. And it starts early, often with preverbal toddlers handed their parents’ cellphones and tablets to entertain themselves when they should be observing the world around them and interacting with their caregivers.

In its 2013 policy statement on “Children, Adolescents, and the Media,” the American Academy of Pediatrics cited these shocking statistics from a Kaiser Family Foundation study in 2010: “The average 8- to 10-year-old spends nearly eight hours a day with a variety of different media, and older children and teenagers spend more than 11 hours per day.” Television, long a popular “babysitter,” remains the dominant medium, but computers, tablets and cellphones are gradually taking over.

“Many parents seem to have few rules about use of media by their children and adolescents,” the academy stated, and two-thirds of those questioned in the Kaiser study said their parents had no rules about how much time the youngsters spent with media.

Heavy use of electronic media can have significant negative effects on children’s behavior, health and school performance. Those who watch a lot of simulated violence, common in many popular video games, can become immune to it, more inclined to act violently themselves and less likely to behave empathetically, said Dimitri A. Christakis of the Seattle Children’s Research Institute.

Schoolwork can suffer when media time infringes on reading and studying. And the sedentary nature of most electronic involvement — along with televised ads for high-calorie fare — can foster the unhealthy weights already epidemic among the nation’s youth.

Read the whole article at The New York Times

Stronger Warning for NSAIDs From The FDA